The folks at SPACES really know how to throw a good party – and their grand opening weekend on January 14 and 15 did not disappoint.  It was two days of performances, temporary installations, delightful food and drink, and of course some dancing.

During the Saturday night “Roving Housewarming Party” nearly 30 area artists either contributed art or gave performances; one artist even played an upright bass in the shower of the new Visiting Artist’s Apartment (Adam Tully led impromptu sing-alongs of classic tunes throughout the night).  The participating artists were chosen by curators Corrie Slawson and Christina Vassallo (SPACES Executive Director).

Works of art and installations were spread around the various rooms, and true to the avant-garde spirit of this venerable institution, many of them were difficult to discern or even recognize as art, while others knocked your socks off.  It felt like going on a scavenger hunt – with surprises around every corner, even in the boss’s office.  Vassallo’s famous pup Truman is arguably the real boss at SPACES – he spends most days there, often greeting visitors at the door.  Truman inspired Lauren Davies’s work, “Truman Eats. LIKE A BOSS. Truman Drinks. LIKE A BOSS”, two custom dog bowls and mat. In one of SPACES’ new workshop areas (they now have a “clean” workroom and “dirty” workroom, for resident artists and others to use), was an installation by Amber J. Anderson titled: “January, 1939”.  One of the only artists to take up the building’s history as its subject, Anderson recreated a work table using a found photograph of women packing coffee in the very same room. The white bags, all carefully placed on the table were empty, and the blank calendar and white apron add to the feeling of transience.

Kristin Rogers’ installation was basically hidden in plain sight.  In fact, I probably walked through it three times before I saw the label. 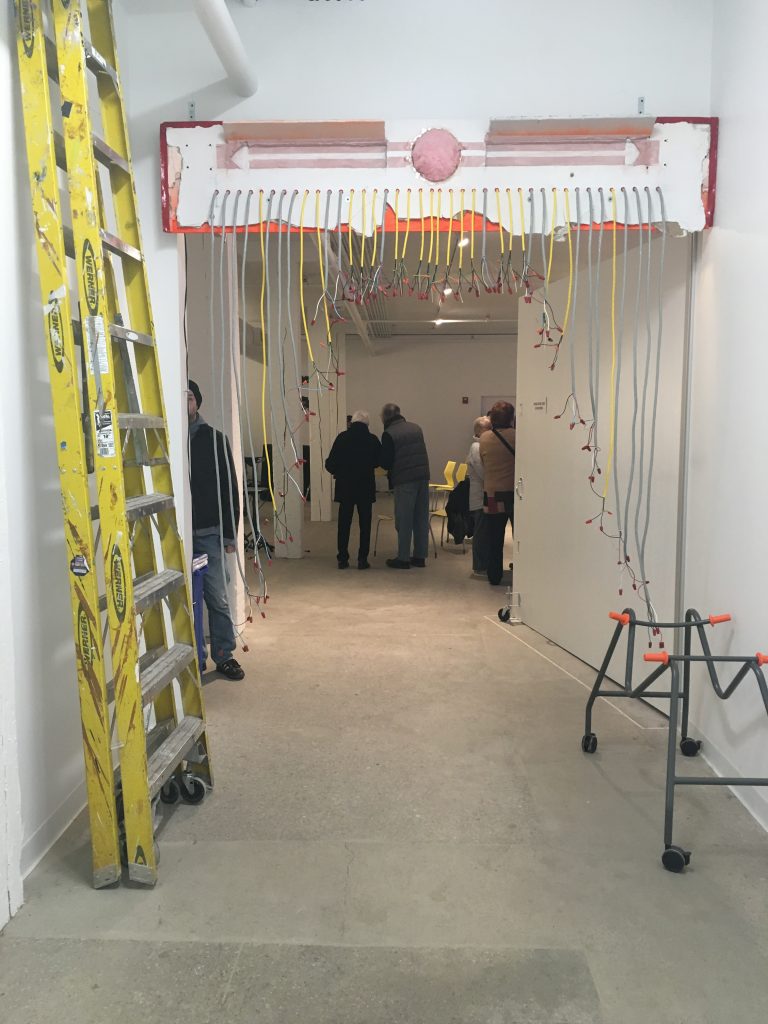 In “Conduit (Duet)” Rogers uses a chunk of the old Superior Viaduct Building to present an “assisted history” of the institution.  Hanging cables become a curtain, unfinished drywall, a ladder, and some other pieces of equipment make up the piece, leaving the unsuspecting viewer to think, “well, I guess they didn’t quite finish this part yet.” When I realized it was a piece by Rogers, I laughed – so it’s a bit tongue in cheek, but the way Rogers ties (literally) the two buildings together is a fitting tribute. Lori Kella and Michael Loderstedt presented an installation that also tied to the two buildings together.  In a small, dark room, a train with a single light rattles around a track, causing shadows to be cast along the wall.  You can watch a video clip of the train in action here. “Alternate Route” traces the journey between the old location at the Superior Viaduct to the new building, featuring facades and elements of buildings along the way. 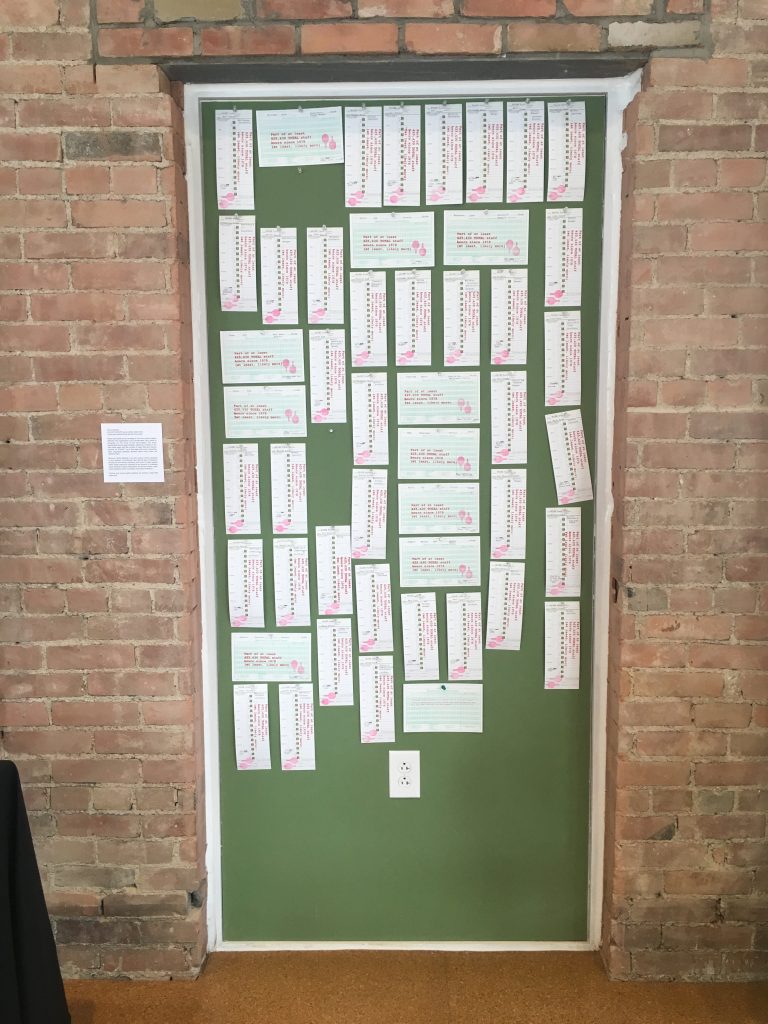 Corrie Slawson addressed the history of SPACES by calculating the amount of time members of staff worked over the years, and then created timecards showing their personal amount of hours against the total staff amount of 425,430 hours.  The typed and screenprinted cards (likely made at her print shop, Ping Pong Press) are an acknowledgement of the countless hours of work that goes into running an institution like SPACES. Slawson then invited each person to take their timecard home as a memento. 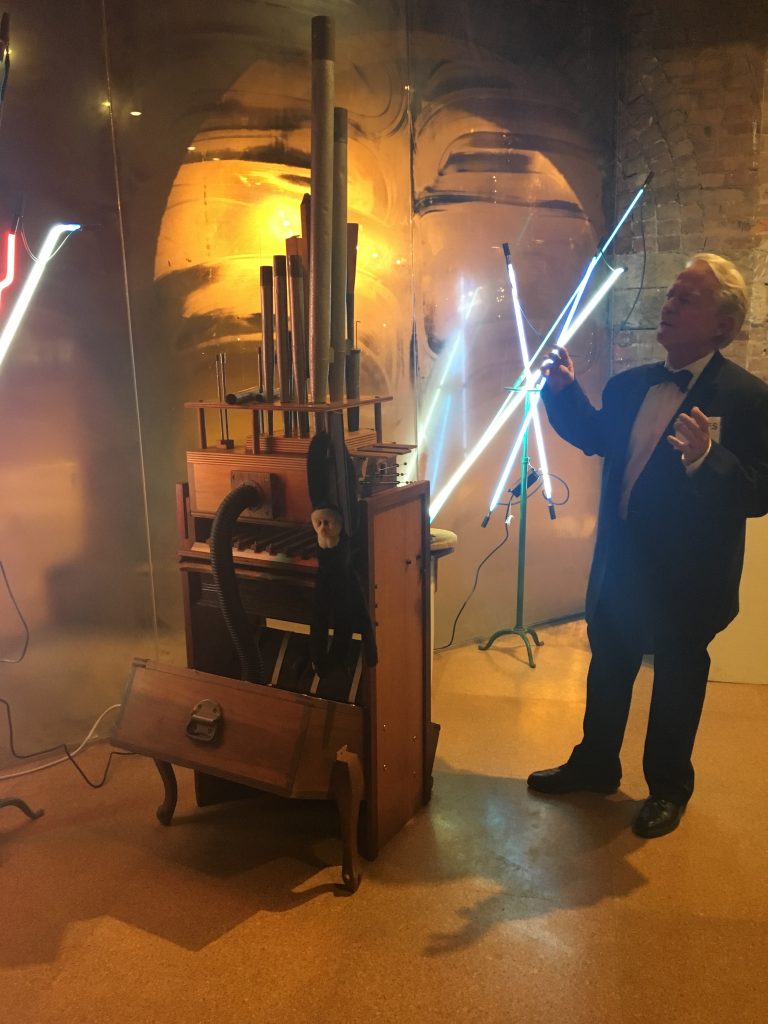 In another felicitous tribute to the history of SPACES, Jeffry Chiplis reprised his 1983 portable pipe organ dedication performance, originally given at the opening of the SPACES location on West Sixth Street. The organ is a make-shift machine using spare parts, discarded pipes, and a foot-pumped bellows, was flanked by two dazzling neon sculptures.  The music created through his contraption was at times grating, and sometimes etherial – but definitely never boring.  To see a clip of his organ in action, click here.

And if you missed the big opening, don’t worry – SPACES first exhibitions in the new space open this Friday, January 27th, including Philadelphia’s Imani Roach, Cleveland’s Anthony Warnick, and Australian collective Soda_Jerk.  For more information about the opening, and what the new SPACES location has in store for their first year, take a look at www.spacesgallery.org.